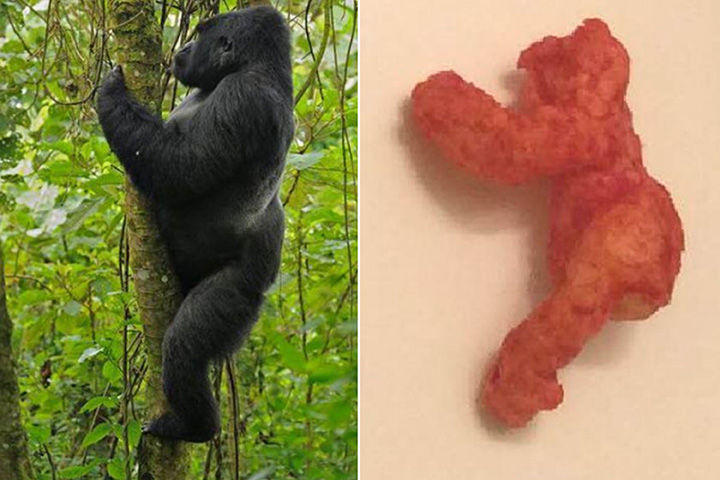 If you’ve ever walked into a 7-Eleven and gasped at the prices in the chips aisle, you haven’t seen anything my friends.

Just in time to cash in on the Harambe craze, a Cheeto with an uncanny likeness to the famous gorilla managed to fetch a whopping $99,000 on eBay.

His captors at the Cincinnati Zoo may have shot Harambe dead, but apparently his spirit lived on to be reborn as a cheesy snack.

For those in the dark about the incident, a three-year-old fell into a nearby moat and Harambe grabbed and dragged the child. His body language was seen as a possible threat and zoo officials perceived Harambe’s handling of the boy as too rough. The decision was made to kill the gorilla after he had carried the boy up a ladder out of the moat onto dry land.

Getting back to the eBay auction…

“I opened up a bag of Flamin’ Hot Cheetos and as soon as I looked inside I came across this unique Cheeto that looks like Harambe the gorilla,” read the description of the whacky listing. “This item up for bid is only for this unique Cheeto, bag not included. This makes a great collectible for anyone who appreciates rare items.”’

It actually looks like three Cheetos fused together, with limbs perfectly positioned just like Harambe’s were when scaling trees.

Bidding started innocent enough at just $11.99. But then again, the original bidder Chris from Burbank, CA, proved the madness of crowds can be traced back to the maddest of them all.

It turns out the “winner” may have bailed as eBay had some trouble tracking the person down. Lucky for the seller there were several bids over $90,000 for possible second-chance offers.