Yesterday, an article written by Keith Rabois was posted on seekingalpha, slamming eBay for not being fun anymore. “Where Did All the Fun Go?”, the headline asks.

Most often, people blame eBay’s decay on factors like the weakening economy, the rise of Amazon, as well as eBay’s own inefficient search functionality. But the real and simple reason is eBay is no longer fun. Over the years, it has lost online ground and eyeballs to pure entertainment destinations such as YouTube and social networking sites like MySpace and Facebook.

To help push this argument home, various traffic research graphs illustrate how eBay’s traffic has slowed down (see the most recent example below, comparing 2007 and 2008). While the internet as a whole grew, eBay shrunk. 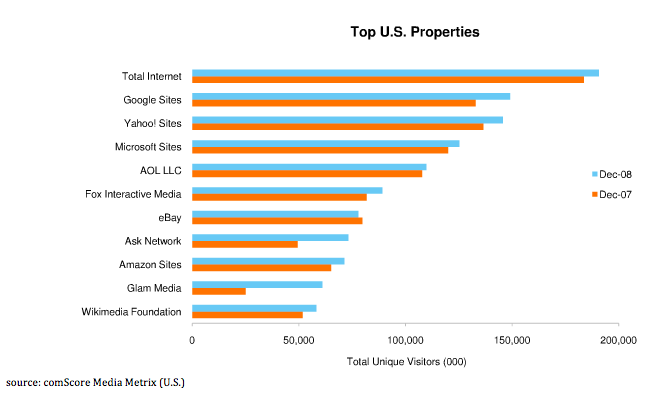 In the first quarter of 2004, almost 50 percent of the entire U.S. Internet population visited eBay every month. By 2008, eBay’s visitors accounted for only 1.5 percent of total minutes spent online.

Still, I fail to see how less traffic necessarily means online auctions are not as fun as they used to be to the average person.

In a similar (and more convincing) article, Scot Wingo blames online classified sites such as kijiji or craigslist for eBay’s dwindling popularity. 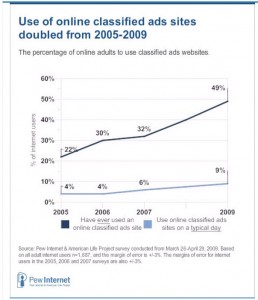 Newspapers were losing classified revenue to eBay hand over fist in 2000/2001, as eBay gave people a much easier way to sell their items. The Pew Internet Project released a report, showing that classified sites (mainly craigslist), have doubled in usage between 2005-2009.

Was it just social networking and free online classified ads that led to the decline or is there more to this?

Perhaps eBay was more fun in 2000 because it was relatively new. For many at the time, buying online was a fascinating new possibility and the fact it was an online auction made it more exciting.

One user commented that sniping tools have taken the fun away. “You are battling a competitor you’ve fought a number of times before–and someone comes in 5 seconds before the end of the auction with a computerized snipe taking it away from both of you.”

Sure it sucks being sniped when you lose. But how about when you win? For web savvy surfers sniping tools are great since they allow you to set the maximum bid and forget about it. One reason eBay isn’t getting as much traffic, is because snipers don’t have to keep visiting the auction, refreshing their browser and staring at a clock.

Less time on eBay might simply mean surfers have become more efficient with the use of numerous online tools. In my eyes, the tools make eBay a more exciting place to visit all over again.